A few weeks ago, I wrote a post on the problems of coming home and all that entails. In it, I mentioned somewhat in passing, the eroticism in violence and combat. I wrote:

In war there is Eros, a chance at transcendent glory and eroticism all mixed with the brutal reality of the violence and horror on the field of battle.  Psychologically, in the aftermath of combat, the warrior often needs to come to terms with this paradox of eroticism and brutality, of Ares and Aphrodite.  This duality of violence and eroticism is also captured in sculpture.  For instance, these juxtaposed gods are seen in Antonio Canova’s Mars et Venus, Mathieu Kessels’ Mars and Cupid, and John Gibson’s Mars Restrained by Cupid. For the active duty soldier, sailor, or Marine, the focus is almost entirely on the erotic or glory of fighting for Country and God. As the drill instructors at Parris Island drilled into you “God, Country, and Corps” in that order. The individual is not present.

A reader commented that they wished I would write more about that, so this post will weave together some thoughts on this topic. I think it is important to do so as many do not understand this Terrible Love of War (Hillman, 2004). What follows is a combination of the personal and the aesthetics of combat and war.

Before turning to this idea of an erotic aesthetic in war however, I need to address a common misconception that peace is the natural order among human beings. On the contrary, the history of mankind is one littered with violence.  From the most primitive beginnings through modern man, our capacity for organized violence and war-making has only expanded.  There are early images of individual homo sapiens grabbing an expedient weapon and bashing in another’s head, to the war images of today; the cruise missiles, drone strikes and their aftermath filling our screens and newspapers in a sanitized, diluted and packaged image.  In the Western world, the primitive image of one-on-one violence and war-making embodied in the mythical image of Ares has given way to war-making as Apollonian that is conducted from a distance bereft of the ensuing gore and crushing psychological effects of the battlefield.  Hillman (2007) said:

Mars [Ares] moves in close, hand-to hand, Mars propior and propinquus.  Bellona is a fury, the blood, the blood-dimmed tide, the red fog of intense immediacy.  No distance (p. 134).

In fact, we need to look again at the aesthetic aspect of Mars….at this language, these procedures as the sensitization by ritual of the physical imagination.  Consider how many different kinds of blades, edges, points, metals and temperings are fashioned on the variety of knives, swords, spears, sabers, battle-axes, rapiers, daggers, lances, pikes, halberds that have been lovingly honed with the idea for killing. (p. 130)

Edged weapons belong to Ares.  They point, literally, to the need for no-distance.  If Ares is represented by the no-distance blade, then Apollo’s silver bow points towards distance:  the place of artillery, missiles and bombs. In war’s planning and initial execution, Apollonian thinking pervades:  cruise missiles, over-the-horizon targeting (OTH), drones, Naval gunfire, ground attack aircraft, all raining unseen, updated arrows of death upon so-called enemies.  These weapon systems reify the image of Apollo’s and Artemis’ bows in their design and use.  These beginning states of war elevate Apollo while seeming to denigrate Ares.  The United States military knows it is easier to seduce the public, soldier, sailor or Marine with Apollo rather than Ares:  the close gore of death is kept at a distance, the impact on real, individual human beings safely hidden away behind the missile flying out of a launch tube with landing co-ordinates substituted for the image of its human impact.  Thus, the militaries of the world switch to more and more indirect fire, more missiles, drones, and artillery.  These weapons allow belligerents to increase not only physical space, but psychic space.  To my point, Lt. Col. (ret.) Grossman points out [that]:

At the physical distance in which the soldier has to use a non-projectile weapon, such as a bayonet or spear, two important corollaries of the physical relationship come into play.  First we must recognize that it is psychologically easier to kill with an edged weapon that permits a long stand-off range, and increasingly more difficult as the stand-off range decreases….The physical range provided by the spears of the Greek and Macedonian phalanx provided much of the psychological leverage that permitted Alexander the Great to conquer the known world.   (p. 120)

The consistent aim of projectiles is to distance the shooter and an experience of the underworld (p. 35).

Culturally, Americans seem to fall for the Siren song of Apollonian war.  Take one of our latest “kinetic military action[s]” (Obama, 2012) in Libya.  Kinetic is military euphemism for bomb, a chemical reaction that explodes as 500, 1,000 or 2,000 pounds of chemical energy sends metal bomb casings and shock waves ripping through the euphemistic term for a fellow human being—a target.  Missouri Representative Ike Skelton (2001) memorialized the use of Apollonian smart bombs in the Congressional Record:

The Persian Gulf War, 1990-1991….demonstrated the devastating efficacy of high technology weapons like smart bombs, the success of stealth technology, the importance of establishing air supremacy and the advantages of disabling the enemy’s infrastructure and command, control and communications capability.  (p. 10,494)

Completely missing is the psychological dimension of Ares, the war god of close combat.  Instead, there is the fantasy image of a clean war, where only bad guys die in a sudden, bloodless death.  As of yet, Ares has not made his appearance, the individual combatants have yet to close the gap, both physically and psychologically.  The gore and stench of battle has yet to be seared into every survivor’s psyche.

I may seem to have digressed from an examination of Eros present in war, but the shift to Apollonic war needs to be placed in context in order to understand the deconstruction of war as individual combat. What I am setting up here is an understanding of how the individual has been expunged from the public imagination of war. Given the context I have been building, it is time to pivot to the individual.

Combat veterans tend to see their experience as an exercise in survival rather than a defense of national values….one undergoes the “ideal” or test without the possibility of that “idea of glory” or “decision of holy validity” [emphasis added] there is all of the pain but none of the form. (p. 41)

Nor could the patrols seeking out an elusive enemy, the ambushes in which Americans were likely to be the surprised victims, or the “search and destroy missions” lashing out at noncombatants achieve the psychological status of meaningful combat ritual….the men were adrift in an environment not only strange and hostile but offering no honorable encounter, no warrior grandeur [emphasis added]….Men who fight wars inevitably become aware of the terrible disparity between the romantic views of heroism expressed “back home” and the reality of the degradation and unspeakable suffering they have witnessed, experienced and caused. (p. 38)

Notice this accepted expectation of honorable encounter. Here, I want to return to the sculptures mentioned in my opening of this essay: 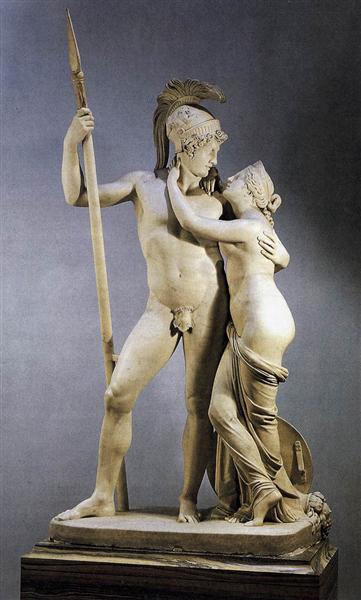 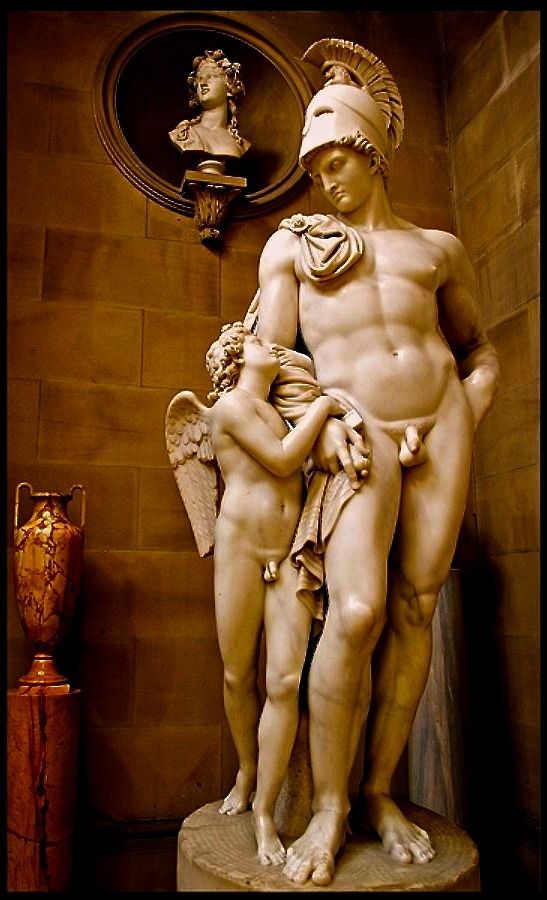 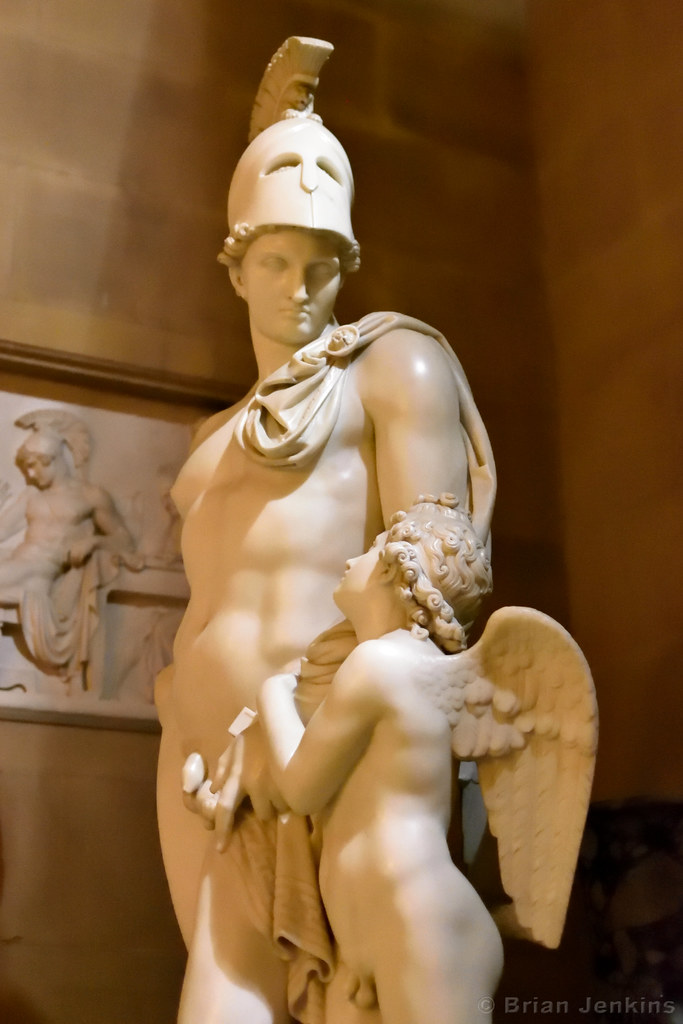 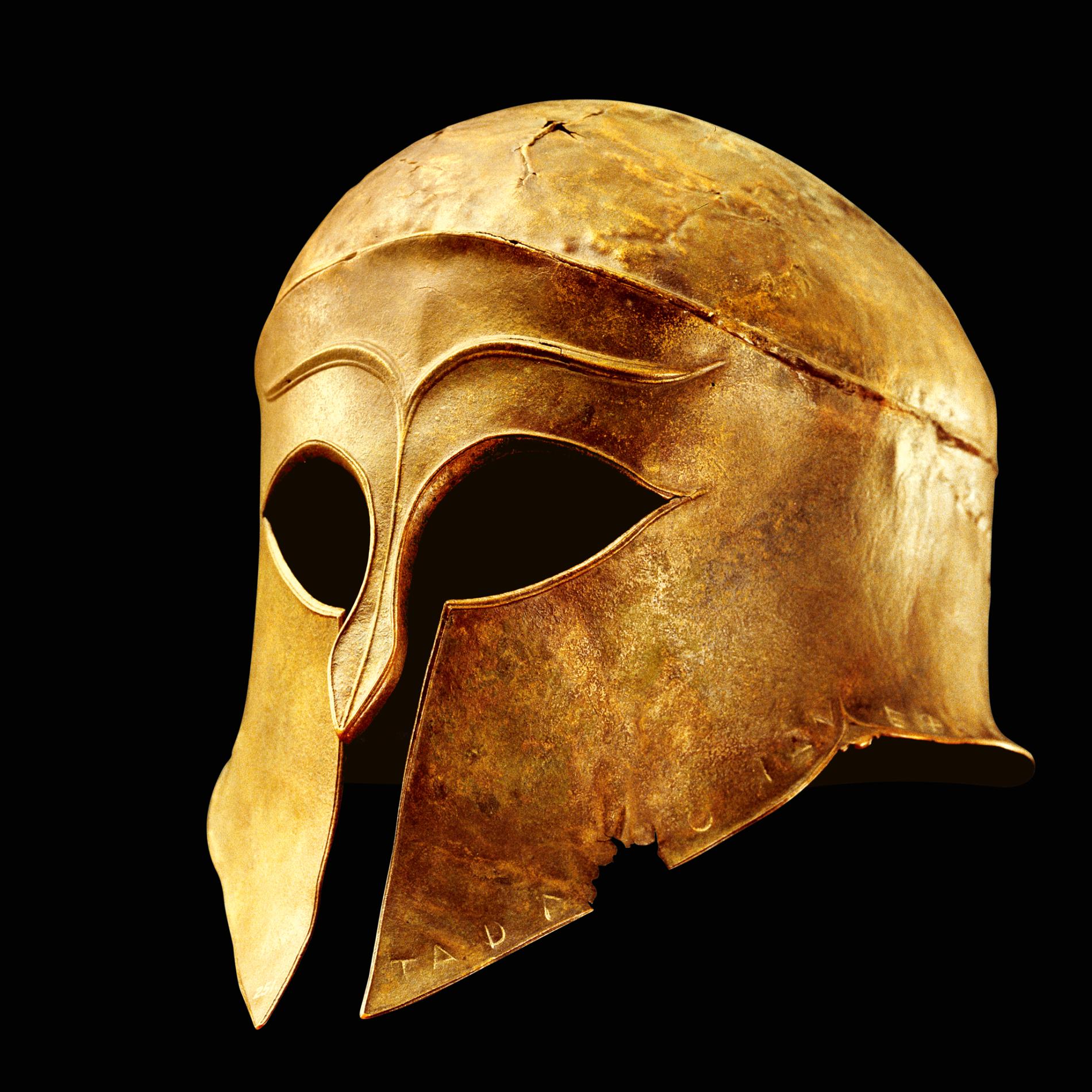 Then, the dance continues with a new partner…and another and another and another, until the battle is over or the matador succumbs to the goring bull. Then the “victors” consolidate and prepare for the next grand dance of life and death. The feeling is both immense terror during the dance and wild exultation at still being alive at the end, at least in that moment. It is a feeling not experienced by Apollo shooting his arrows from afar, it can only be experienced by Mars propinquus. It is like a courtship, this terror and exultation–if I approach will my attraction be affirmed? To find out, one must dance with the other with all of the uncertainty that entails and the terror it may strike in our heart: then the exultation as the flirtation resolves into love.

Thus, lies our terrible love of war, for it is the struggle of life itself writ large: a dance of life and death.