From personal experience, as well as my research grief, is an integral part of moral injury. Just yesterday, grief hit my wife and I extremely hard as we put our German Shepherd Dog, Gurty, 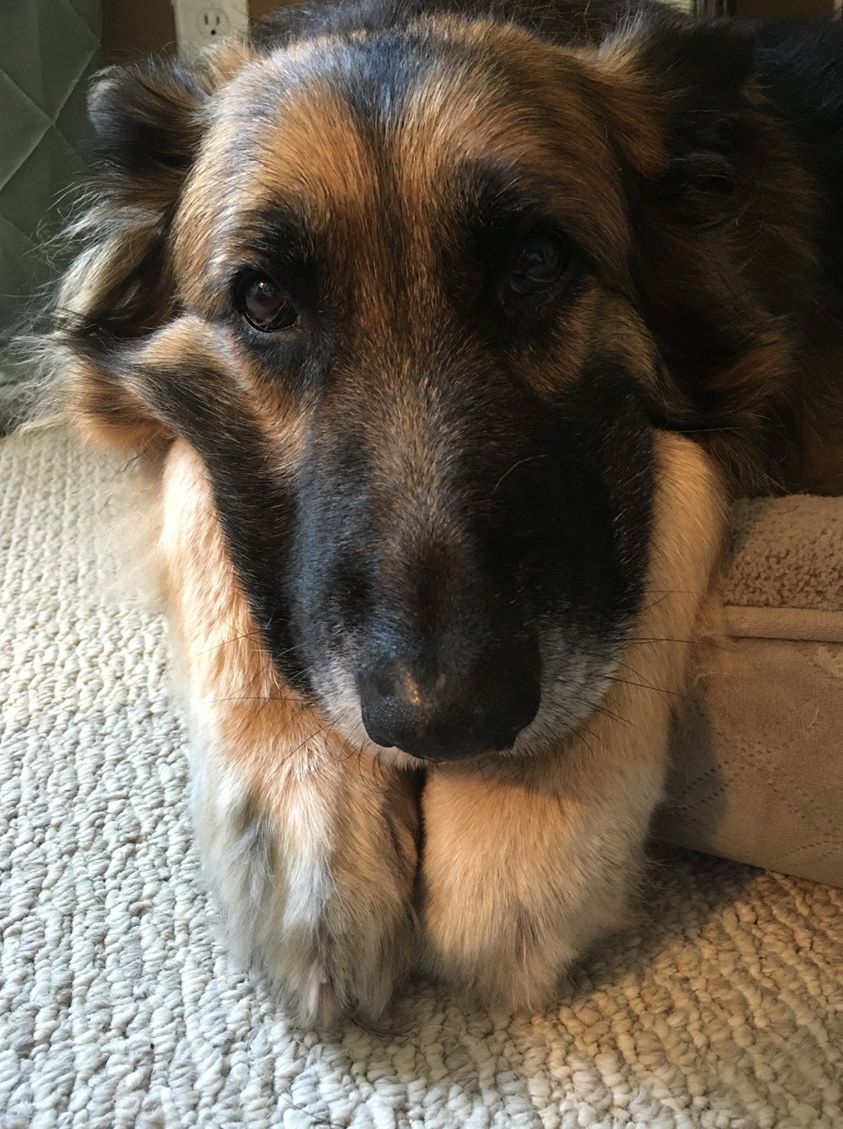 to sleep. She was suffering from a degenerative neurological disease called Degenerative Myelopathy which can affect all dogs, but especially long backed dogs such as German Shepherds, Corgis, and Dachshunds. We first noticed last July 4th (2019) that she seemed a little wobbly, but we thought it was because we had mildly sedated her due to her being terrified of the loud booms of fireworks. Over the next few months, we noticed that she didn’t run as far or fast at the bark park and the instability started getting worse. A few months later my wife found a video online that shattered us: it was on the disease and it showed a German Shepherd who had the disease and the progression. Once they exhibit symptoms, you typically only have 8-12 months of quality life left with them. On July 2nd, after 5 – 6 consecutive days of being unable to control her bowels (she had never, ever had a problem before this disease), she was unable to stand on her own. Instead, even on the carpet/rugs which we had placed to help her, she was simply dragging herself on her front legs. If the disease is allowed to progress to it’s natural end, they will end up suffering and in cardiopulmonary distress eventually dying from asphyxiation due to their inability to control their heart or lungs. Knowing that she was in distress and wanting to avoid having her petrified over the next two-three days of fireworks, we made the difficult choice that it was time. Though both of us had made these difficult decisions in the past, we were not prepared for the aftermath.

Coming home, we walked into a silent house with her ghost everywhere. There were her toys, strewn around the living room. Upstairs, my wife found her kong, still full of cookies. Being an Alsatian, 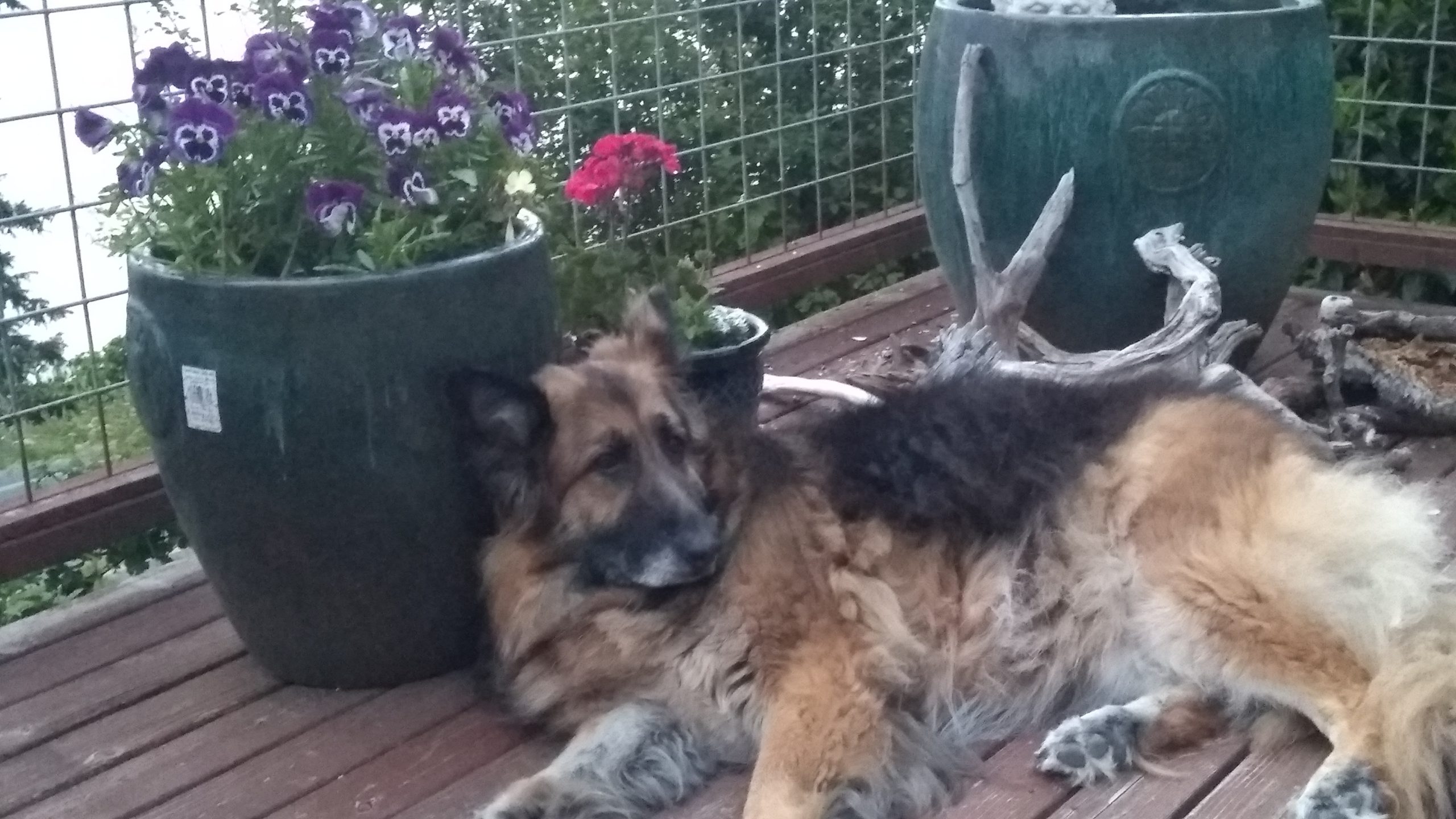 her long hair was everywhere we turned. As my mom rightly called it, the ‘horrible silence’ was oppressive, broken only by the alternating sobs of my wife or I. We sat numb on the couch, crying and just holding each other. I witnessed my wife cycling through anger, denial, bargain over and over again. With two cats and a German Shepherd, normally there would be the cacophony of the ‘dog parade’ with a toy because she was jealous of the cat, or the cat meowing as he tried to judge where the dog was, etc., etc. Instead the horrible silence fell like a wet blanket. Not being a human death, we realized there was no ritual to help those of us still living without our departed. Numbly, we ate KFC without really tasting it, broken only by my wife sobbing and running out of the room because normally Gurty would be there, laying by the table, eager to leap into ‘hoover mode’ at any crumbs that fell from the table…but instead, there was silence. Even today, some 27 hours since she departed, we are struck dumb in silence. Writing this is my therapy. My wife does not want to go into her office and I cannot blame her: that is where Gurty and her would write and play together during the day.

This house we are renting has changed: it no longer feels like home. We gave notice a few days ago as we are in the midst of buying a house. This house without our dog is bereft of life and warmth. Even when the moaning, whining, and meowing would test the limits of our sanity, it was better than this oppressive silence.

You might ask what all of this has to do with moral injury? Though the thread might be a little tenuous, please stay with me as I try to explain. I wrote a small requiem memorial on my personal blog (davidfisherphd.com) and then posted it to facebook. Over 24 hours later, not one comment or word of solace from the 1,645 facebook ‘friends’ that I have, nor from the 42 ‘followers.’ Out of 1,687 people, many of them long-time friends, cousins, and close family, not one of them made a comment. More oppressive silence. Whether it is because no one knows what a requiem is (and is too lazy to look it up), nobody gives a shit, or I’m shadow banned’ on facebook, I have no idea. All I hear is the Sounds of Silence. This brings me to the point of tying this to moral injury and posting it here rather than my personal blog. Most of the combat veterans I know (myself included) that suffer from moral injury, suffer almost exclusively in oppressive silence. As an aside, empty platitudes such as ‘thank you for your service’ tend to irritate me, but I will usually just smile and nod, at least here in Washington state and Arizona where it is usually accompanied by a 10% discount. This silent suffering and inconsolable grief that comes from losing mates in combat, to losing parts of your soul in service to a lie, to losing a part of you represented by this dog that loved you unconditionally until the very end weighs heavily on the psyche. This is compounded by the silent nature of the suffering–the lack of a witness to your suffering and grief. So, on this day when we celebrate giving the big middle finger to King George III on July 4, 1776, to all suffering silently from moral injury: I feel your pain and grief and I witness you.